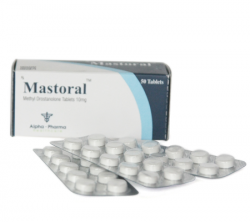 Mastoral is an oral steroid, its active substance is Methyldrostanolone.

An effective dosage of Mastoral for physique or performance-enhancing purposes seems to begin in the range of 10-20 mg per day, taken for no longer than 6 or 8 weeks. At this level it seems to impart a measurable muscle-building effect, which is usually accompanied by fat loss and increased definition. Don't expect to gain 30 pounds on this agent, but many do walk away with more than 10 pounds of solid muscle gain when using this agent alone. In determining an optimal daily dosage, some do find Mastoral to be measurably more effective when venturing up to the 30 mg range. Potential hepatotoxicity should definitely be taken into account with such use, however. To avoid further escalating liver strain, 20 mg daily of daily of Mastoral is sometimes stacked with a non-toxic injectable steroid, such as testosterone for mass-building phases of training, or Nandrolone or Boldenone for more lean tissue gain and definition, instead of simply increasing the dosage. Mastoral also works well in cutting cycles, where its lack of estrogenicity is highly favored.

In the athletic arena, an effective oral daily dosage would fall around 2.5 mg per day, taken in cycles lasting no more than 4-6 weeks to minimize the chance for virilization. The main point of contention with females is probably going to be the 10 mg per capsule dosage, which is far too high to use. Application would require opening each capsule and splitting the powdered contents up into 4 separate doses. As with all steroids, virilization is still possible.

Mastoral is not aromatized by the body, and is not measurably estrogenic. An anti-estrogen is not necessary when using this steroid, as gynecomastia should not be a concern even among sensitive individuals. Since estrogen is the usual culprit with water retention, Methyldrostanolone instead produces a lean, quality look to the physique with no fear of excess subcutaneous fluid retention. This makes Mastoral a favorable steroid to use during cutting cycles, when water and fat retention are major concerns.