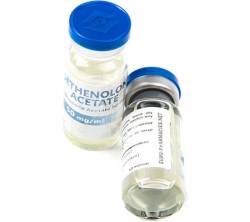 Methenolone Acetate is a synthetic androstane steroid derived from dihydrotestosterone (DHT). It is a structurally altered form of the testosterone by-product, with the addition of a double bond at carbon atoms 1 and 2 of the latter. Methenolone Acetate also has an extra 1-methyl group for protection against metabolism and breakdown in the liver. Methenolone Acetate shares several qualities with its parent substance. A major quality is that the aromatase enzyme does not aromatize it into the female hormone estrogen. This makes Methenolone Acetate less likely to produce estrogenic side effects, such as fluid retention and gynecomastia.