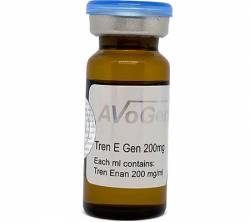 Tren-E Gen 200 is Trenbolone’s long-releasing concoction, good for strength boosting and increasing your lean muscle mass. The ester in this case- Enanthate- enables the trenbolone to be slowly released into your body. It’ll peak within just a few days but can take almost two weeks before it’s fully absorbed by the body. Tren-E Gen 200 has been regarded as an extremely powerful anabolic that’s even more powerful than testosterone. Its popularity has been attributed to its cutting and bulking properties. Among its unique benefits, one is that it can’t change itself into estrogen, explaining why most bodybuilders prefer it to other powerful steroids.

Trenbolone Enanthate is a version of the Trenbolone steroid with carbon attached in the 19th position. This makes the steroid harder to break down in the liver. As a result, the effects of Tren-E Gen 200 last for several days. The steroid is better at synthesizing proteins than some other drugs and increases the production of growth factors in your body, specifically the Insulin-like Growth Factor (IGF-1) and Fibroblast Growth Factor (FGF). A 1989 study showed a positive effect on muscle development from Trenbolone injections on IGF-1 and FGF levels in rats. The rats got bigger, faster.

With Tren-E Gen 200 bodybuilders will only need one injection per week. Doses are usually in the 200-600 mg/week range, and the ester length of this steroid is quite long. As an average daily dosage – 37.5-75 mg is the most popular range when running a cycle. The site of injections should be rotated in order to avoid irritations. The most commonplace on the human body for administration is the buttocks. In stacking with other compounds, during a cutting phase Tren-E Gen 200 and non-aromatizing anabolic such as Winstrol or Primobolan can be used together.

Tren-E Gen 200 can also be stacked with the addition of stronger compounds like Dianabol or Testosterone. With the strong impact, Trenbolone Enanthate has on endogenous Testosterone, after concluding the cycle HCG and/or Clomid/Nolvadex are recommended to be used in order to recover.